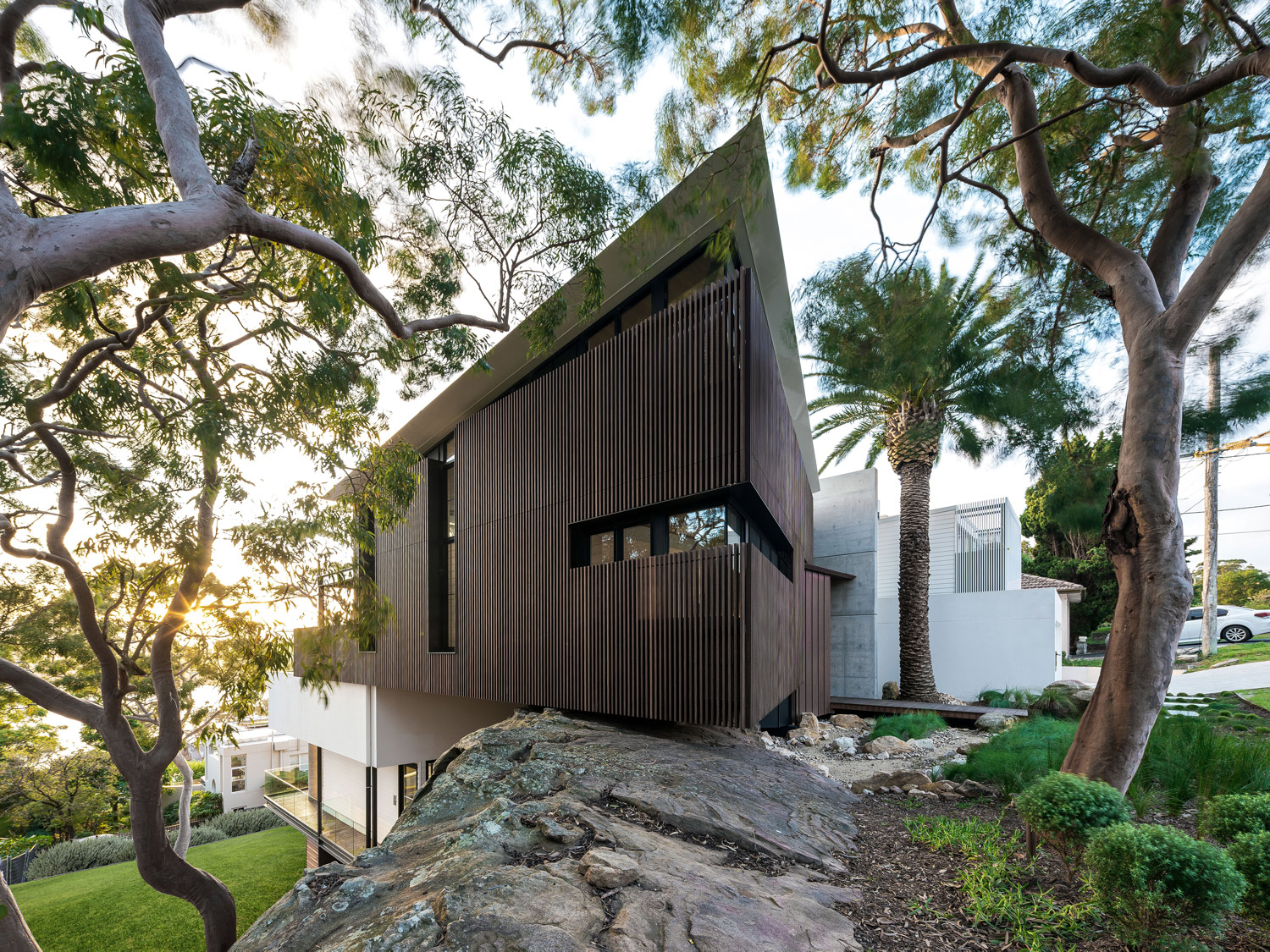 Between Earth and Sky – Higher Ground by Stafford Architecture

Mimetic of its environment yet deliberately contrasting with it, physically intertwined with the landscape yet also carefully separate, Stafford Architecture’s Higher Ground is driven by an interactive approach to its site.

When the architects first visited the site, they were struck by an intuitive sense that this was a remarkable piece of land. Unlike a typical character-less urban block, the steep site is cut through north-south by a rocky sandstone outcrop and numerous mature redgums grow upon it. “Our clients approached us after purchasing the site with an approved development application. On visiting the site and experiencing the magic of this leafy corner with the incredible sandstone ridge, we could not fathom building on top of and cutting into this significant feature – as the approved DA proposed,” recalls Bronwyn Litera, Stafford Architecture senior associate. “A prominent strength and spirituality were clearly present, and we strived to respect the nature of the rock and the stories that it carried.”

When the architects first visited the site, they were struck by an intuitive sense that this was a remarkable piece of land.

View Gallery
View Gallery
Unlike a typical character-less urban block, the steep site is cut through north-south by a rocky sandstone outcrop and numerous mature redgums grow upon it.

With the clients in agreement, Stafford Architecture set out to design a building that could not only preserve both the ridge and trees but that would also be made all the richer and more meaningful for its interaction with these enduring qualities of the landscape. From the elevated vantage point atop the rock, the expanse of Middle Harbour is revealed, but capturing these views while complying with height regulations without cutting into the ridge, as had been previously proposed, proved to be a challenge. This was elegantly resolved by the decision to ‘hover’ the building over the rock and allow the roofline to be guided by the height restrictions, resulting in a pitched, angular form. “We worked hard to maintain the rock as ‘untouched’,” says Bronwyn. “Structural connections were made as minimal as possible, services were concealed within the voids of the existing sandstone, and the loose boulders were re-purposed amongst the landscaping.”

Stafford Architecture’s Higher Ground is driven by an interactive approach to its site.

The sense of lightness, almost of breathing space between the building and rock, is further emphasised by the home’s elevated position within the treetops. Not only are the living spaces and decks surrounded by the canopy of leaves but the architecture makes space for the trunks and branches within its fabric, allowing the trees to grow around and through gaps in the built form, just as they might intertwine amongst a natural formation. “We wanted particularly to accentuate the lightness of the building above the sandstone outcrop,” Bronwyn remarks. “This ‘touching the ground lightly’ was important to maintaining the spiritual connection that was so apparent on our first visit. The house is to feel weightless and airy for the visitor and inhabitant, somewhat of a ‘treehouse’ floating in the canopy, even meeting the heavy rock with floating structural steel elements and glass – delicately connecting physically and visually.”

“We worked hard to maintain the rock as ‘untouched’.”

View Gallery
View Gallery
The sense of lightness, almost of breathing space between the building and rock, is further emphasised by the home’s elevated position within the treetops.

The openness of the plan, with few doors to close off spaces, as Bronwyn explains, “more often using changes in levels to define spaces instead,” emphasises the awareness of the home’s lightness. There is a sense, especially in the living area that flows out seamlessly onto the adjoining outdoor deck, that one is occupying a platform amongst the trees. Airconditioning was foregone in place of operable louvres, large openings, and indoor-outdoor spaces that passively cool the home and subtly heighten the inhabitants’ awareness of the natural flow and circulation of air. Expanses of glazing take in the views of the water through branches – a sense of limitlessness that is echoed by the infinity pool that dissolves the boundary between the edge of the deck and the view beyond. The double-height void, meanwhile, (a clever planning move in response to the height regulations that enables a second level) offers an expansion of volume that allows the home to revel in the sense of freedom and space.

The sense of lightness, almost of breathing space between the building and rock, is further emphasised by the home’s elevated position within the treetops.

Yet so much lightness calls for a grounding force, just as the degree of openness requires the corresponding protective qualities of enclosure and privacy. And, while the site, with its elevated position, expansive outlook and magnificent tall trees, is undeniably defined by the way it feels perched above the rest of the world, the rocky ridge is an equally strong, robust presence that balances the sense of space and sky with an awareness of the earth and rock underfoot. Higher Ground is sensitive to this duality and responds accordingly. For every design element that emphasises lightness, there is another quality that provides a counterbalance.

A key example is the concrete blade wall that “acts as the spine of the building, separating the grounded private wing that hugs the site from the more stated communal wing that hovers lightly above the rock,” says Bronwyn. This wall, both in its robust materiality and bifurcating effect, recalls the way the rock similarly forms a spine in the terrain. Where the lightweight spotted gum batten exterior screens nod to the vertical rhythm of the tree trunks, the concrete wall speaks to the rock below. Internally, the rawness of the substance informs the broader interior palette, which, comprised of oak, brass and copper, tends towards materials that originate in the earth. Paired with “gentle curves in the joinery, brass details and warm timbers make the spaces feel safe and secluded, but homely and intimate,” Bronwyn says.

For every design element that emphasises lightness, there is another quality that provides a counterbalance.

Though the glazing is an important element of openness, the deep-reveals and black frames create a sense of the boundary between the refuge within and the brightness of the world outside. Glazing is also used as an aperture not to the view beyond, but to the geology of the site itself. In a gesture that finds precedent in work such as Glenn Murcutt’s Donaldson House, a large window is set immediately against the rock, which is subtly lit to draw attention to its presence. In this decision to momentarily focus the outside world in extreme close-up, rather than fixating solely on the water in the middle distance, Higher Ground demonstrates an impulse to interact with its site more fully, acknowledging that while the building commits to touching the earth lightly, it nevertheless relies upon its strong foundation in the terrain.

Higher Ground demonstrates an impulse to interact with its site more fully, acknowledging that while the building commits to touching the earth lightly, it nevertheless relies upon its strong foundation in the terrain. 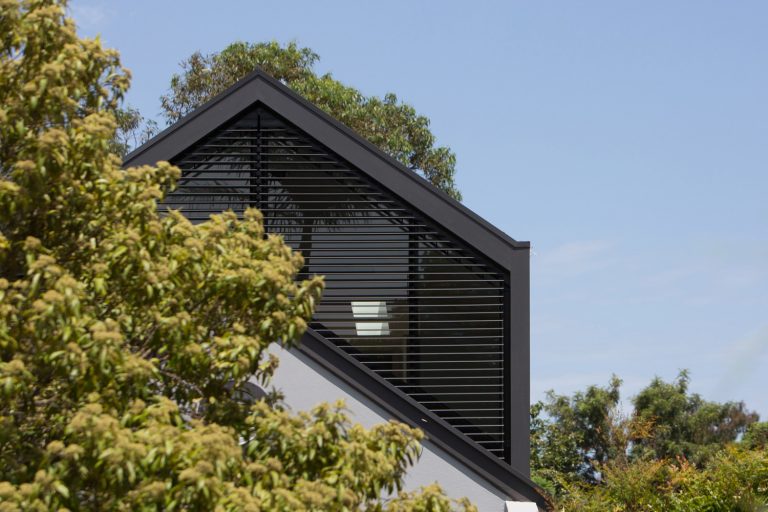 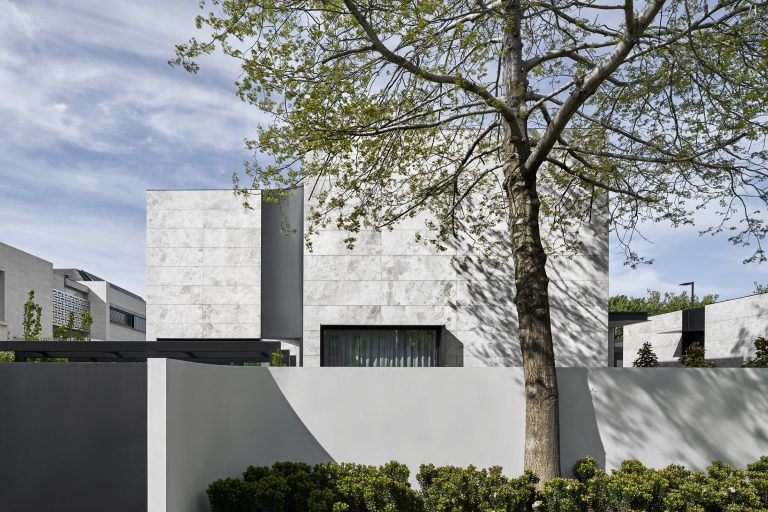 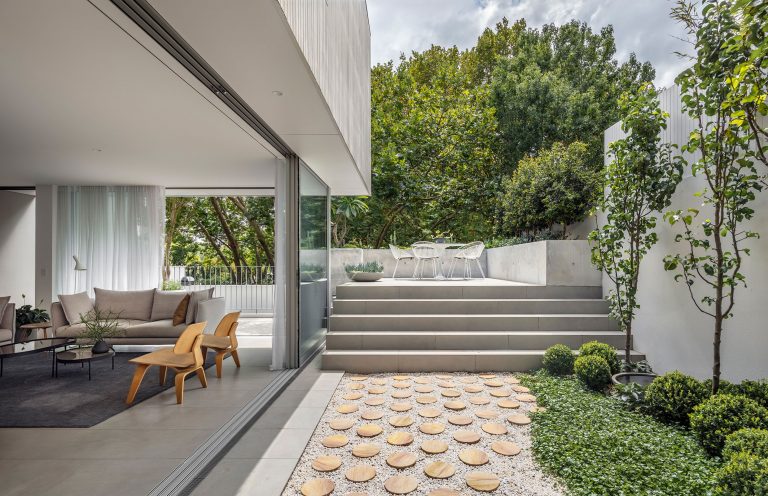 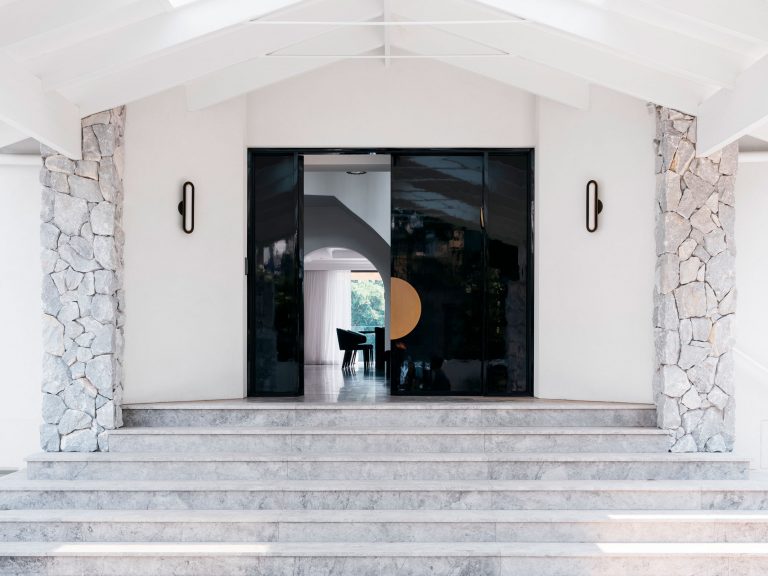 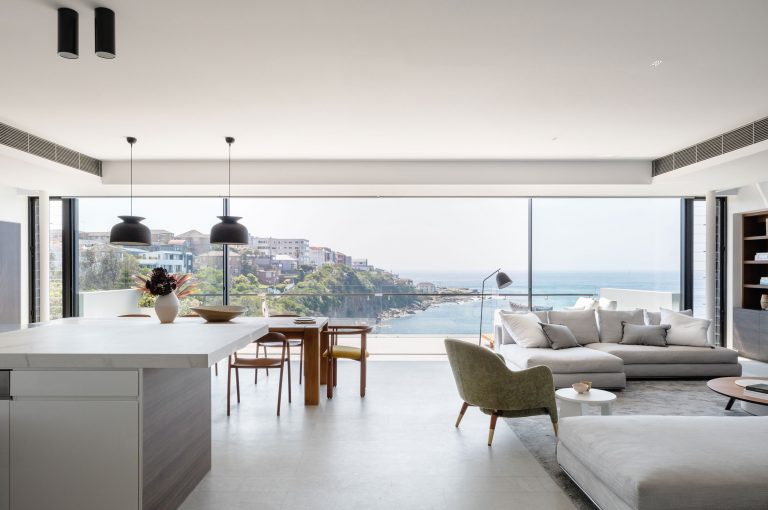 Connection Through Warmth and Refinement – Bay House by Milieu Creative 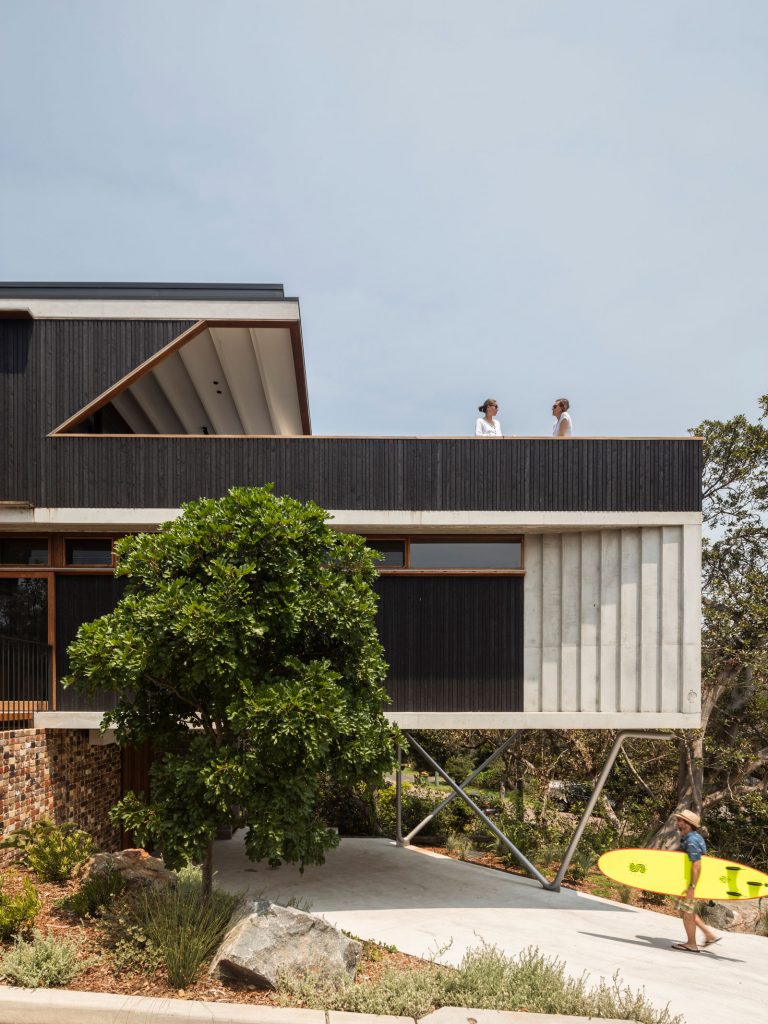 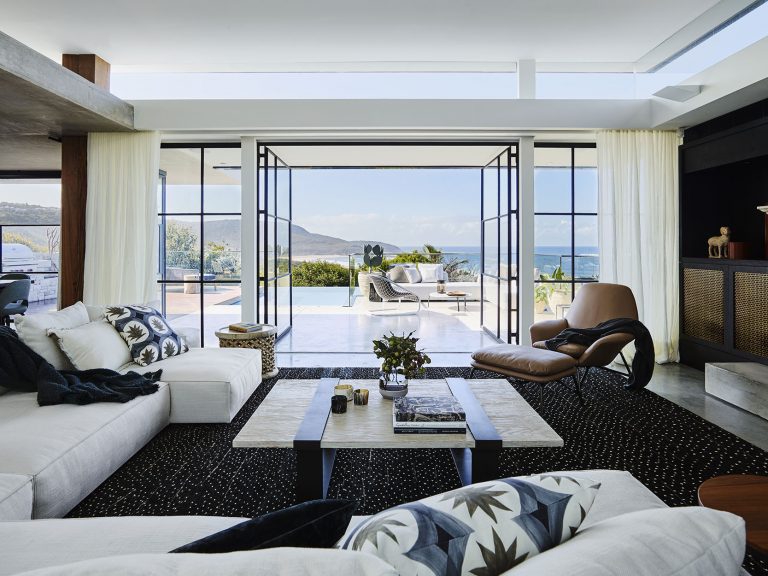 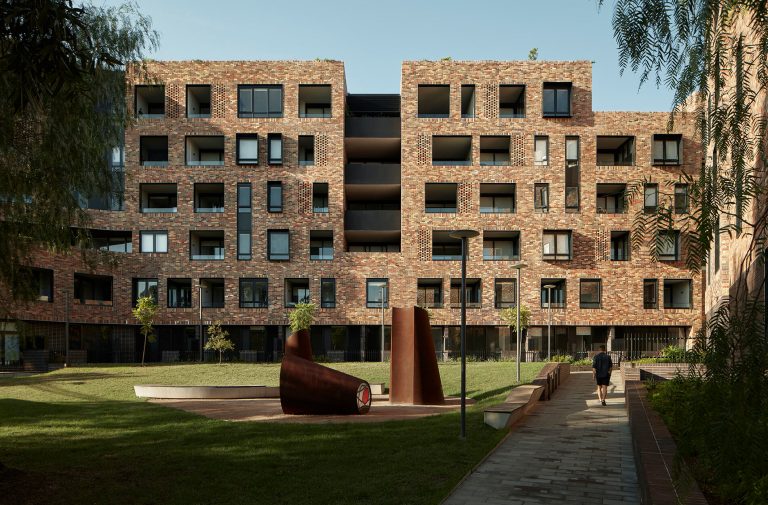